The Bridge of Sighs (Ponte dei Sospiri, built 1602) spans the Roi di Palazzo and connects the Old Prison and interrogation rooms in the Doge’s Palace to the New Prison located across the canal to the right, in Venice, Italy, Europe. The bridge can be seen from Ponte della Paglia next to the Doge’s Palace. The bridge name, given by Lord Byron in the 19th century, comes from the suggestion that prisoners would sigh at their final view of beautiful Venice through the window before being taken down to their cells. In reality, the days of inquisitions and summary executions were over by the time the bridge was built and the cells under the palace roof were occupied mostly by small-time criminals. Little could be seen from inside the Bridge due to the stone grills covering the windows. A local legend says that lovers will be granted eternal love and bliss if they kiss on a gondola at sunset under the Bridge of Sighs as the bells of St Mark's Campanile toll. This legend served as a plot line for the movie "A Little Romance," featuring Laurence Olivier and Diane Lane. Venice (Venezia), founded in the 400s AD, is capital of Italy’s Veneto region, named for the ancient Veneti people from the 900s BC. The romantic City of Canals stretches across 100+ small islands in the marshy Venetian Lagoon along the Adriatic Sea, between the mouths of the Po and Piave Rivers. The Republic of Venice was a major maritime power during the Middle Ages and Renaissance, a staging area for the Crusades, and a major center of art and commerce (silk, grain and spice trade) from the 1200s to 1600s. The wealthy legacy of Venice stands today in a rich architecture combining Gothic, Byzantine, and Arab styles. Venice and the Venetian Lagoon are honored on UNESCO's World Heritage List. 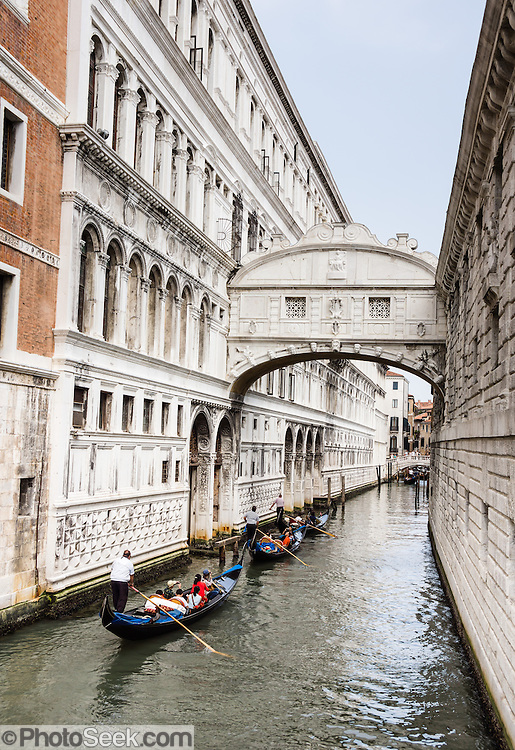