A lava lizard mounts a Galapagos Marine Iguana (Amblyrhynchus cristatus) at Punta (Point) Espinoza, on Fernandina (Narborough) Island, Galápagos Islands, a province of Ecuador, South America. Marine Iguanas, the world’s only sea-going lizard species, are found nowhere else on earth. Marine Iguanas feed almost exclusively on marine algae, expelling the excess salt from nasal glands while basking in the sun, coating their faces with white. Marine Iguanas live on the rocky shore or sometimes on mangrove beaches or marshes. Most adults are black, some grey, and the young have a lighter colored dorsal stripe. The somber tones allow the species to rapidly absorb the warm rays of the sun to minimize the period of lethargy after emerging from the frigid water, which is cooled by the Humboldt Current. Breeding-season adult males on the southern islands are the most colorful and will acquire reddish and teal-green colors, while Santa Cruz males are brick red and black, and Fernandina males are brick red and dull greenish. The iguanas living on the islands of Fernandina and Isabela (named for the famous rulers of Spain) are the largest found anywhere in the Galápagos. The smallest iguanas are found on Genovesa Island. Fernandina Island was named in honor of King Ferdinand II of Aragon, who sponsored the voyage of Columbus. Published in "Light Travel: Photography on the Go" book by Tom Dempsey 2009, 2010. 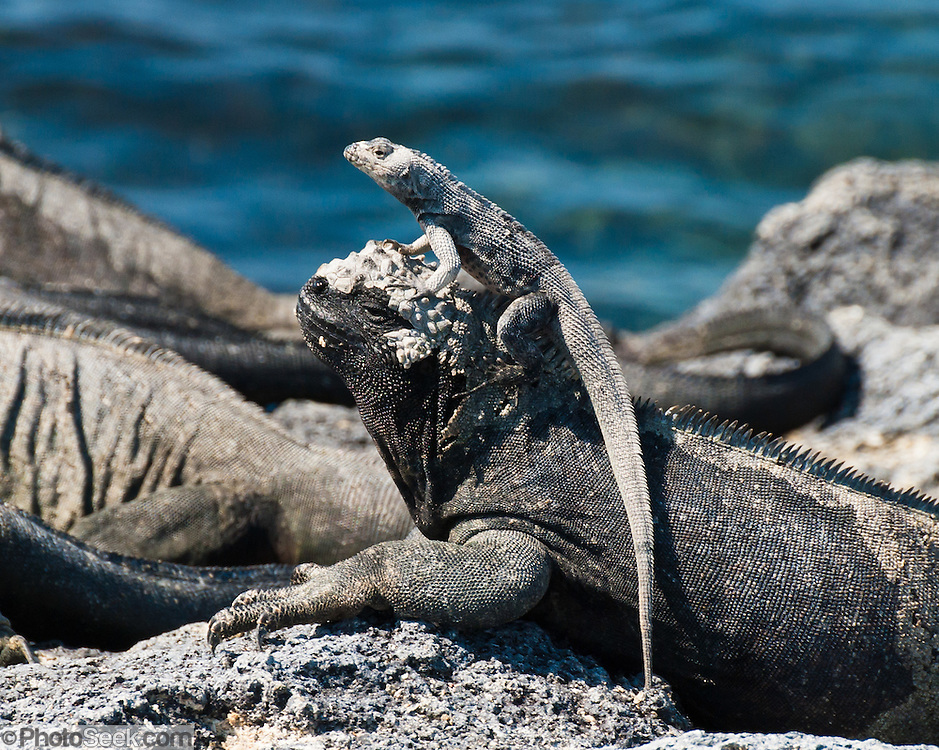