Great Frigatebird (Fregata minor) on Isla Genovesa (or Tower Island), Ecuador, South America. Frigatebirds, which are in the family Fregatidae, are related to pelicans. The Great Frigatebird is a lightly built large seabird up to 105 cm long with predominantly black plumage. The female is larger than the adult male and has a white throat and breast and a red eye ring. The male's scapular (shoulder) feathers have a purple-green sheen. In breeding season, the male distends a striking red gular sac. The species feeds on fish taken in flight from the ocean's surface (mostly flyingfish), and pirates food from other birds less frequently than other frigatebirds. They feed in pelagic waters within 80 km (50 mi) of their breeding colony or roosting areas. Fregata minor is known as the Iwa in Hawaii. The Great Frigatebird measures 85–105 cm (33.5–41.5 in) with long pointed wings and long forked tails. Weighing between 1–1.8 kg (2.2–4 pounds), they have the highest ratio of wing area to body mass of any bird. Juveniles are black with a rust-tinged white face, head and throat. Major nesting populations of Great Frigatebirds are found in the Pacific (including Galapagos Islands) and Indian Oceans, as well as a population in the South Atlantic. A single egg is laid each breeding season. The duration of parental care in frigatebirds is the longest of any bird. Published in "Light Travel: Photography on the Go" book by Tom Dempsey 2009, 2010. 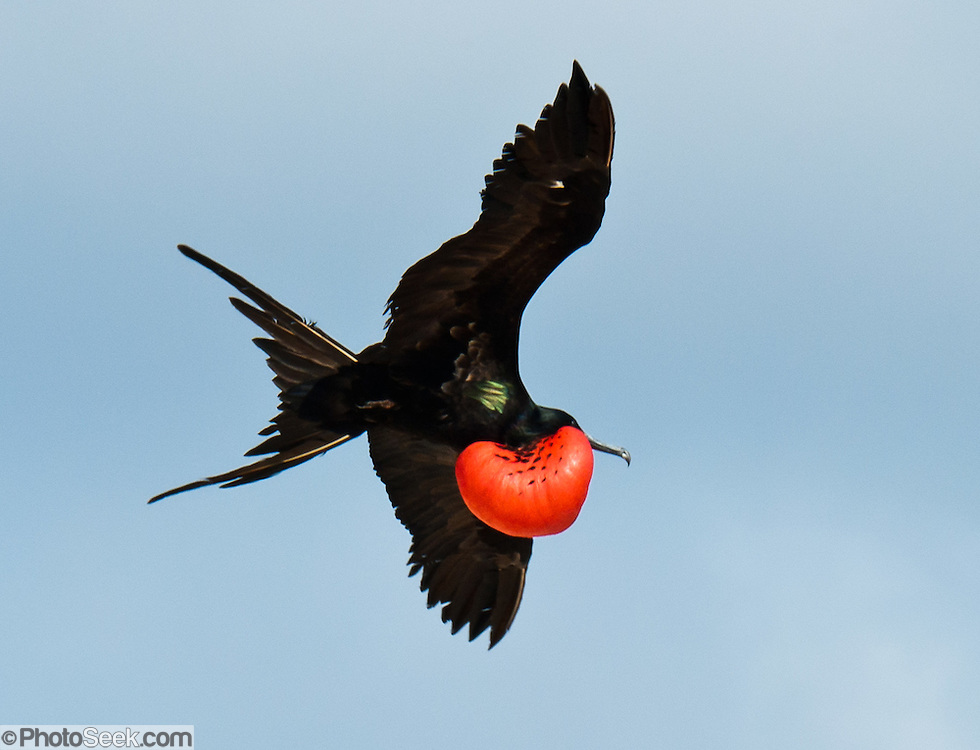