Mist is backlit by the Natural Entrance of Carlsbad Caverns National Park, in the Chihuahuan Desert, southeast New Mexico, USA. Hike in on your own via the natural entrance or take an elevator from the Carlsbad Caverns National Park visitor center. Geology: 4 to 6 million years ago, an acid bath in the water table slowly dissolved the underground rooms of Carlsbad Caverns, which then drained along with the uplift of the Guadalupe Mountains. The Guadalupe Mountains are the uplifted part of the ancient Capitan Reef which thrived along the edge of an inland sea more than 250 million years ago during Permian time. Carlsbad Caverns National Park protects part of the Capitan Reef, one of the best-preserved, exposed Permian-age fossil reefs in the world. The park's magnificent speleothems (cave formations) are due to rain and snowmelt soaking through soil and limestone rock, dripping into a cave, evaporating and depositing dissolved minerals. Drip-by-drip, over the past million years or so, Carlsbad Cavern has slowly been decorating itself. The slowest drips tend to stay on the ceiling (as stalactites, soda straws, draperies, ribbons or curtains). The faster drips are more likely to decorate the floor (with stalagmites, totem poles, flowstone, rim stone dams, lily pads, shelves, and cave pools). Today, due to the dry desert climate, few speleothems inside any Guadalupe Mountains caves are wet enough to actively grow. Most speleothems inside Carlsbad Cavern would have been much more active during the last ice age-up to around 10,000 years ago, but are now mostly inactive. This panorama was stitched from 3 overlapping photos. 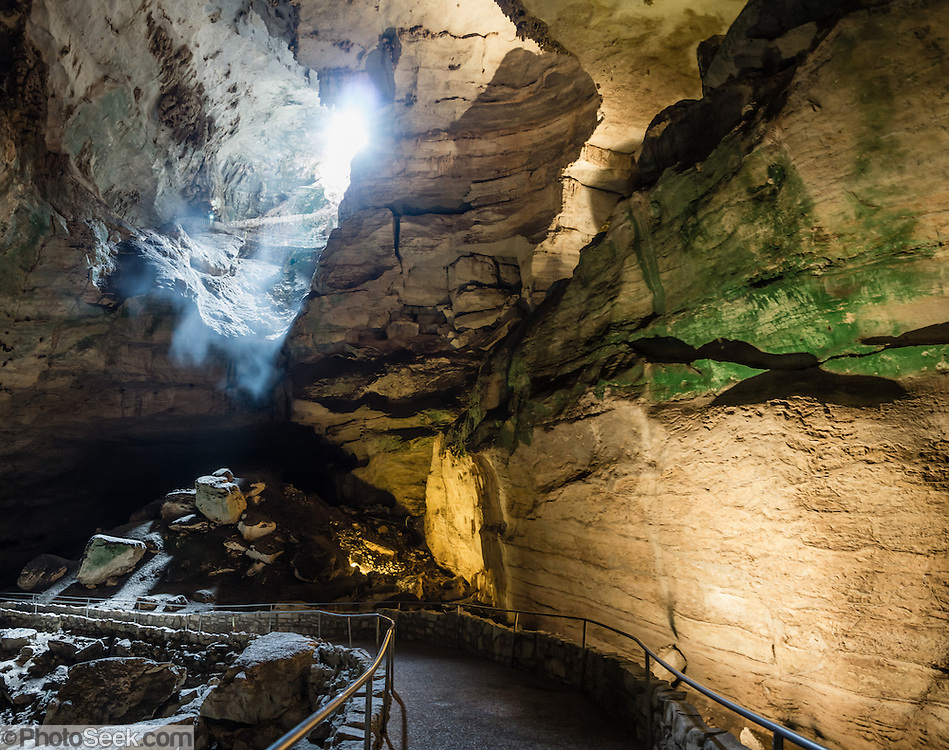