In the National Archaeological Museum in Athens, Greece, see a Roman model of the "Athena Polias" ("Athena of the city") sculpture which was placed in the Parthenon in 432 BC, originally 12 meters high. Athena (Athene or Athina) has Nike in her right hand, and sphinx and griffins in her headpiece. Greeks built the Parthenon atop the Acropolis in 447-438 BCE as a place to worship goddess Athena and also as a treasury to store tribute money moved from Delos Island. The Greek philosopher, Plato (429347 BC), identified Athena with the Libyan deity Neith who was the war goddess and huntress deity of the Egyptians since the ancient Pre-Dynastic period, and who was also identified with weaving. Athena is the virgin patron of her namesake city Athens, and is goddess of wisdom, courage, inspiration, civilization, law and justice, just warfare, mathematics, strength, strategy, the arts, crafts, and skill. Minerva, Athena's Roman incarnation, embodies similar attributes. 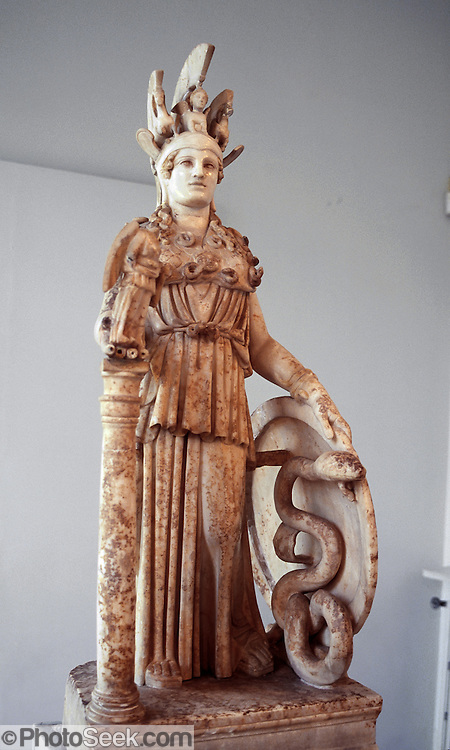