Mary, Queen of Scots (or Mary Stuart or Mary I, 1542–1587) reigned over Scotland from 1542 to 1567. As the only surviving legitimate child of James V of Scotland, she was six days old when her father died and she acceded to the throne. She spent most of her childhood in France while Scotland was ruled by regents, and in 1558, she married the Dauphin of France, Francis. He ascended the French throne as King Francis II in 1559, and Mary briefly became queen consort of France, until his death in December 1560. Widowed, Mary returned to Scotland, arriving in Leith on 19 August 1561. Four years later, she married her first cousin, Henry Stuart, Lord Darnley, but their union was unhappy. In February 1567, his residence was destroyed by an explosion, and Darnley was found murdered in the garden. James Hepburn, 4th Earl of Bothwell, was generally believed to have orchestrated Darnley's death, but he was acquitted of the charge in April 1567, and the following month he married Mary. Following an uprising against the couple, Mary was imprisoned in Loch Leven Castle. On 24 July 1567, she was forced to abdicate in favour of James VI, her one-year-old son by Darnley. After an unsuccessful attempt to regain the throne, she fled southwards seeking the protection of her first cousin once removed, Queen Elizabeth I of England. Mary had previously claimed Elizabeth's throne as her own and was considered the legitimate sovereign of England by many English Catholics, including participants in a rebellion known as the Rising of the North. Perceiving her as a threat, Elizabeth had her confined in various castles and manor houses in the interior of England. After eighteen and a half years in custody, Mary was found guilty of plotting to assassinate Elizabeth in 1586. She was beheaded the following year. 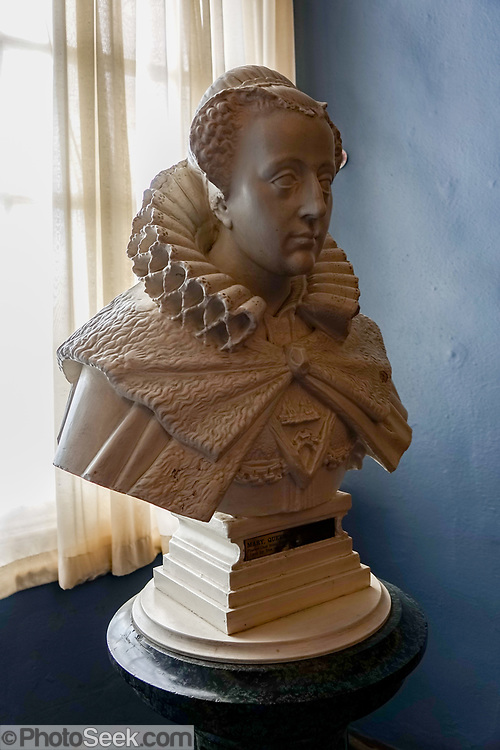