In the Royal Palace of Edinburgh Castle, the King's Birth Chamber is where the first king of Scotland, England, and Ireland was born, James VI. In 1617 the room was painted to commemorate his birth. James VI and I (James Charles Stuart 1566–1625) was King of Scotland as James VI from 24 July 1567 and King of England and Ireland as James I from the union of the Scottish and English crowns on 24 March 1603 until his death in 1625. The kingdoms of Scotland and England were individual sovereign states, with their own parliaments, judiciary, and laws, though both were ruled by James in personal union. James was the son of Mary, Queen of Scots, and a great-great-grandson of Henry VII, King of England and Lord of Ireland, positioning him to eventually accede to all three thrones. James succeeded to the Scottish throne at the age of thirteen months, after his mother Mary was compelled to abdicate in his favor. In Celtic mythology the unicorn symbolized purity, innocence, masculinity and power. The proud, haughty unicorn was chosen as Scotland's national animal because it would rather die than be captured, just as Scots would fight to remain sovereign and unconquered. The unicorn was first used on the Scottish royal coat of arms by William I in the 1100s. Two unicorns supported the shield until 1603, when James VI replaced one unicorn with the national animal of England, the lion, to demonstrate unity. Scotland's unicorn in the coat of arms is always bounded by a golden chain, symbolizing the power of the Scottish kings, strong enough to tame a unicorn. The Scottish motto "Nemo me impune lacessit," means "No one wounds (touches) me with impunity." Edinburgh is the capital city of Scotland, in the United Kingdom, Europe. 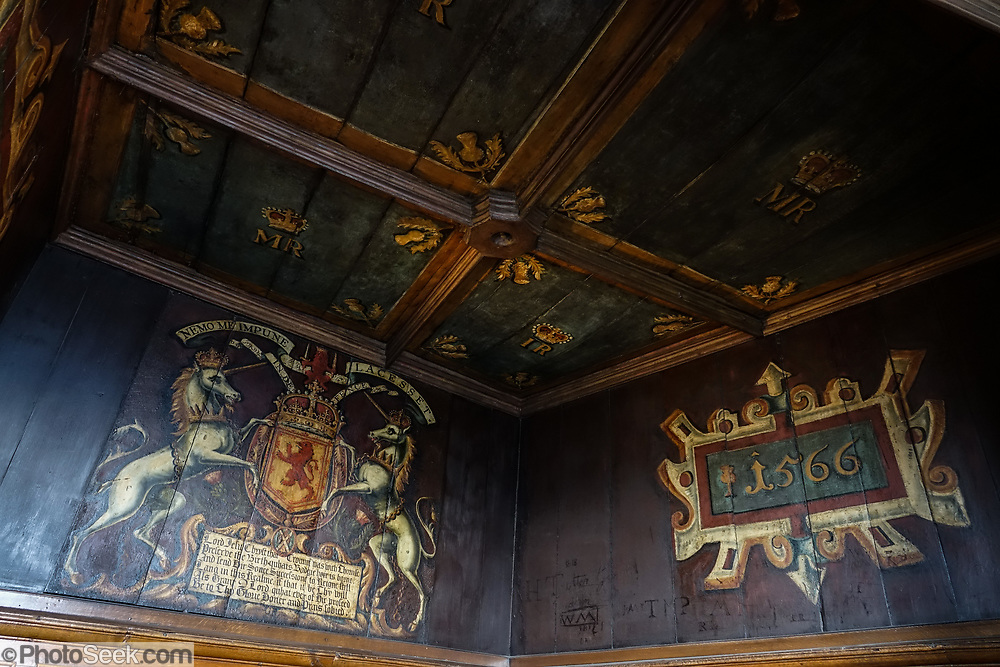