Zorro rears his white horse and his whip magically spells Zorro cursively in the air, in this photograph gifted by the Witney Family to the Beverly and Jim Rogers Museum of Lone Pine Film History. Director William Witney directed two Zorro serials: Zorro Rides again (1937) and Zorro's Fighting Legion (1939). Zorro (Spanish for fox) is the secret identity of Don Diego de la Vega, a fictional character created in 1919 by New York-based pulp writer Johnston McCulley. Zorro is a Californio nobleman of Spaniard and Native Californian descent, living in Los Angeles during the era of Spanish rule. The character has been featured in numerous books, films, television series, and other media. The typical image of him is a dashing black-clad masked outlaw who defends the commoners and indigenous peoples of the land against tyrannical officials and other villains. Not only is he too cunning and foxlike for the bumbling authorities to catch, but he also delights in publicly humiliating them. / In 2015, this fascinating museum (where this Zorro photo is hung) was renamed the Museum of Western Film History. Visit it at 701 S. Main Street, Lone Pine, California, 93545, USA. Web site: www.lonepinefilmhistorymuseum.org 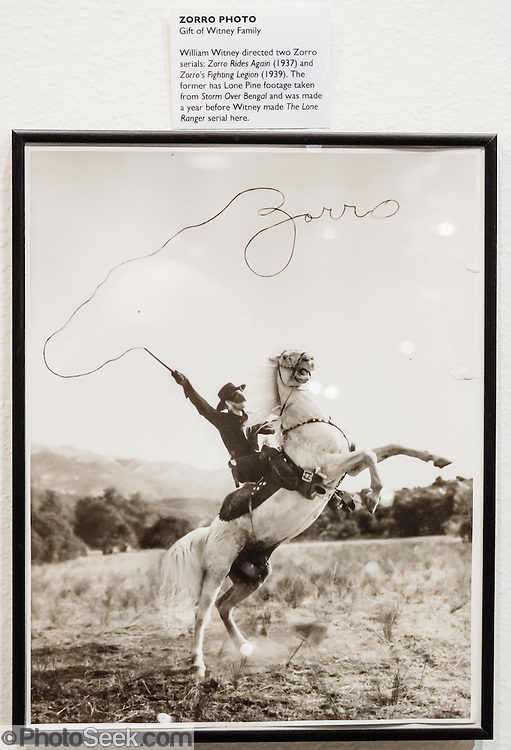