In Columbia Gorge National Scenic Area, see Pierce Island in Columbia River from Beacon Rock State Park, Washington, in the Pacific Northwest, USA. The Columbia River cuts its gorge over 80 miles (130 km) westwards through the Cascade Range, with mountain walls reaching 4000 feet high (1200 meters). The gorge begins near the Deschutes River confluence with the Columbia and extends to the eastern Portland metropolitan area. The canyon connects the Columbia River Plateau with the Pacific Ocean, providing the only navigable route through the Cascades and defining the border between Washington and Oregon. The federally protected Gorge is managed by the US Forest Service. Beacon Rock is a striking monolith composed of basalt, 848 feet high (258 meters). In 1805, Lewis and Clark originally referred to it as Beaten Rock, later as Beacon Rock. They found that Beacon Rock marked the eastern-most tidal influence in the Columbia. It was later known as Castle Rock until 1915 when its name changed back to Beacon Rock. The panorama was stitched from 17 overlapping images. Published by Columbia Land Trust, Fieldbook Early Fall 2013, www.columbialandtrust.org 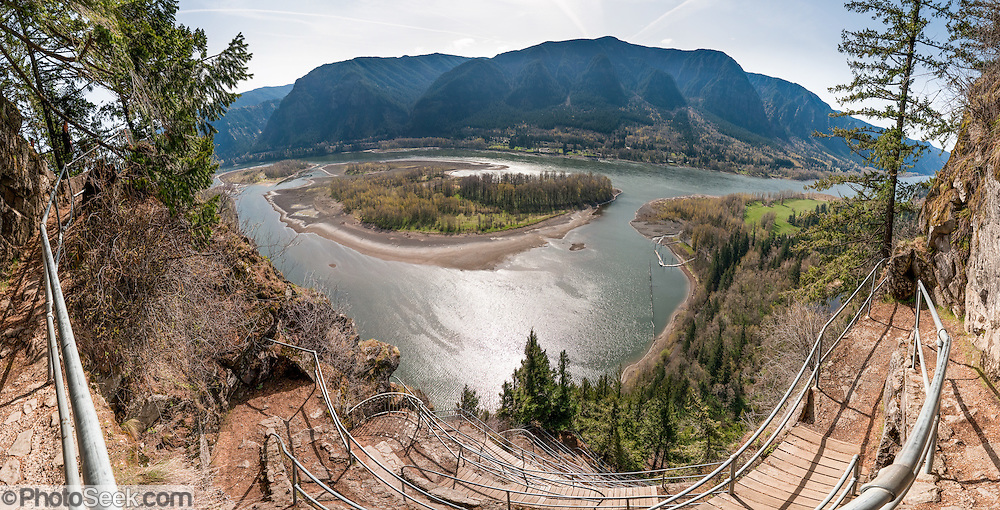